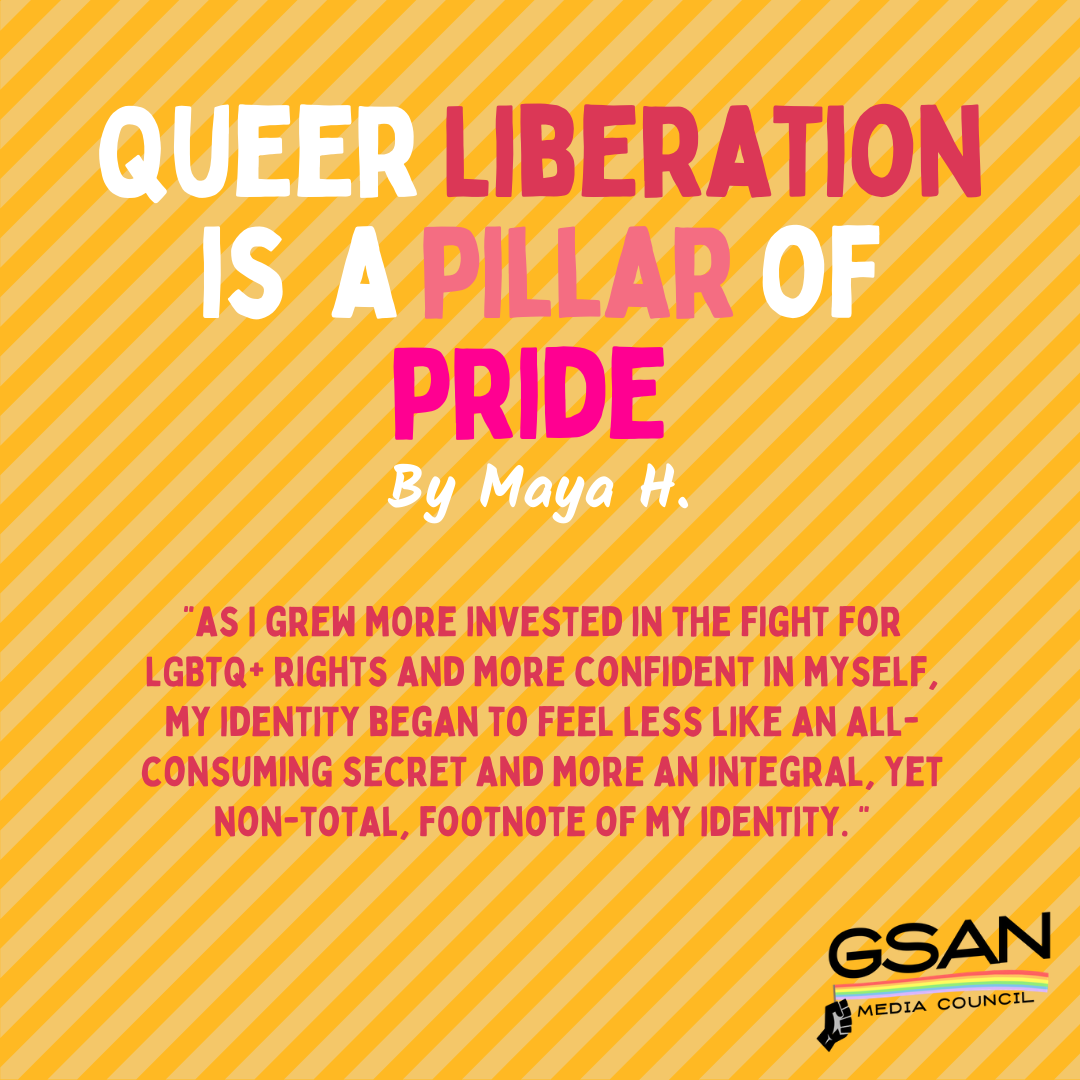 I first dipped my toes in the GSA movement when I was 11 and saw an older classmate hang a poster advertising my school’s GSA club. Sporting a shy grin and using a pile of textbooks to hide my face, I sat through a presentation on the definitions of various sexualities and genders I’d never heard of before. I returned to the club the week after, showing up in the doorframe every Tuesday at lunchtime until eventually I left the textbooks in my locker and knew all the club members by name.

Before my friend urged me to sit in the back seat of that first club meeting, I had never thought of my queerness as something I could share; thought a secret was a secret and that it ought to stay that way. Yet as I grew more invested in the fight for LGBTQ+ rights and more confident in myself, my identity began to feel less like an all-consuming secret and more an integral, yet non-total, footnote of my identity.

Prior to becoming involved in the movement, I suppose I thought of coming out as the end goal, and subsequently was devastated when I came out for the first time and found that I still felt every bit as unworthy as I had prior to the awkward and flustered conversation. But at some point in time, perhaps the first year I participated in the Day of Silence, or the 60 seconds in which a classmate for the inaugural time introduced themselves with their pronouns on the first day of school, I realized that happy coming out stories to be retold over lunch in club meetings were not the eventual victory of our work: complete queer liberation and freedom was.

The drawing of the curtains of the 2020-2021 school year marks my fourth year as one of the thousands of voices in the GSA movement, and more importantly, one of the millions in the battle for LGBTQ+ rights. Looking back on the time I’ve spent surrounded–both physically, and more recently, virtually–with this support system, it’s impossible to get over how much I changed, grew into my voice and body, and most importantly, learned to value my own queer self.

The past year has challenged the work of the GSA movement, in schools, families, and in ourselves. Though it hasn’t been perfect, we have been able to keep the torch aflame, ready to pass it on to whoever needs it most. From after school GSA club Zoom meetings to comforting texts with friends always ready to provide a figurative shoulder to cry on about pronoun confusion, I can not stress my gratitude to the community who did not halt their support when the rest of the world pressed pause.

Pride Month is often characterized by its colorful parties, rainbow saturated social media feeds, and a tsunami of rainbow capitalism. Yet at its essence, it remains something more: a time for queer and trans youth to declare love for ourselves and solidify our work moving past barricades on the road to liberation.