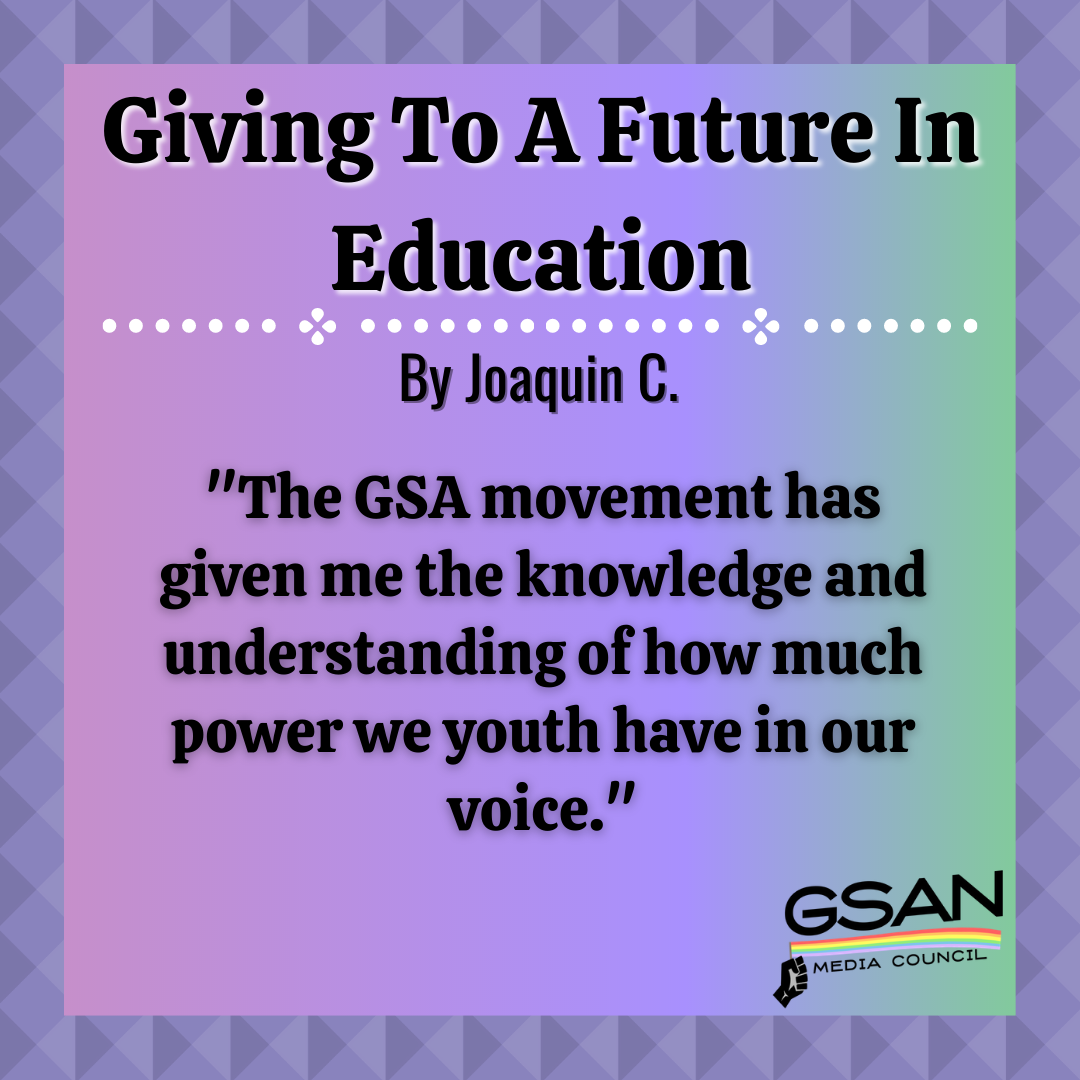 I grew up being titled as different, abnormal, whatever people say about someone who has brown skin, a different sexuality, and is questioning themselves. As a child and throughout the majority of middle school, I didn’t think much of it. I knew I didn’t like it, but I didn’t really understand how much it affected me, my friends, or my family who had gone through the same thing. It wasn’t until 8th grade and early freshman year that I found myself becoming more associated with the GSA movement, and just civil rights in general after being introduced to GSA Network and their Activist Camp in the summer of 2019.  That event really helped me to continue finding my identity and learning the history that our schools still ignore.

The GSA movement has taught me to love myself, to be more open, and to thoroughly know that everyday we are getting closer to a future that fully recognizes and gives justice to LGBTQ+ lives. It has shown me what my rights are: which laws protect us and which laws try to push us down. It has given me the knowledge and understanding of how much power we youth have in our voice. As a kid, never would I have thought that I could go out into the streets and join a protest or rally to demand basic health care rights; never would I have thought to see myself with friends talking about genders and sexualities at my high school; never did I think my school would have a GSA club (which it has had for a few decades). Seeing so much power in the voice of my generation–and those before me and those to come–has shown me a world of opportunity despite what others in the world say to us.

Education is the key to change, I believe. This year, during the week of remembrance for Harvey Milk, parents in my community complained and said they were disgusted by seeing a Pride flag; they were upset to hear that their kids learned about how horrible the government has treated the LGBTQ community; they sent hate speech emails. It showed me that we have a long way to go before we truly get the future that we want and need. Without education, we won’t be able to get those changes we need in society.

Giving back to the movement is something I hope I have done and can keep doing. One of my dreams is to get schools to actually teach LGBTQ+ history. Rarely do you hear a teacher go in depth about who Harvey Milk was (one of the most important political figures for the LGBTQ+ civil rights movement), what the Stonewall riots were, or the many organizations fighting for human rights throughout the country. In California, we need to make sure that schools acknowledge LGBTQ history because it is a law under the FAIR Education Act. We can’t let California schools continue to dismiss LGBTQ history, especially in talks about the civil rights movement.I have high hopes that voices out there are demanding for schools to make a new curriculum to recognize the history of the movement.

Queer Liberation is a Pillar of Pride
Finding Your GSA Community