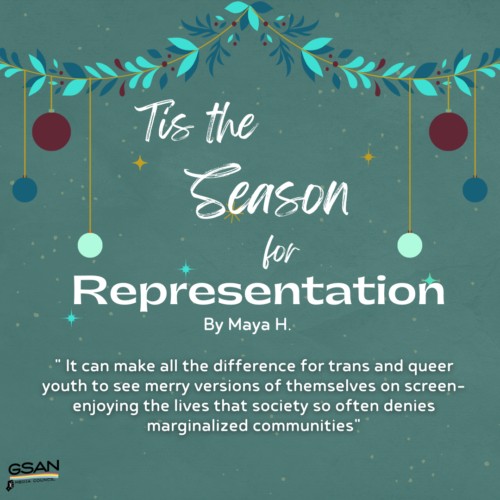 For many, December isn’t just associated with snowmen or the brainstorming of new year’s resolutions. It’s also the time of the year to curl up with a steaming mug of hot chocolate and start a new show, movie, or book that features an adorable, if overdone, holiday-themed happily ever after. Be it a kiss under the mistletoe or an “I love you” whispered by a cozy fire, winter wonderland tropes grace every form of media during the holiday season with never ceasing popularity. For many, holiday movies offer 90 minutes of cheer and love during a season that is often marked by stress and feelings of pronounced loneliness. Yet, these movies fail to represent many of the audience members that they pander to.

Production and streaming companies have long recognized the world’s desire for snow-capped happily ever afters; more than 80 million people annually tune into Christmas-themed movies produced by movie franchise Hallmark alone, prompting the company to release more than 40 films a holiday season. Despite the massive profitability of such movies, though, the production giant is still marred by a disappointing lack of diversity and inclusion of BIPOC, queer, and trans stories, and almost exclusively grants happy endings to the same cookie-cutter identities we have seen represented in media for decades on end. In fact, Hallmark is only set to release its inaugural movie with a leading gay couple this year, more than two decades after the Hallmark Channel was founded. The monumental release of The Holiday Sitter, however, does not excuse the years of anti-LGBTQ+ rhetoric and action by the channel, which has previously refused to run ads featuring queer couples, among other infractions. Still, the release of the movie may – hopefully – signal that tides are changing for even the most conservative and religious of production companies.

Where Hallmark is just beginning to venture into more inclusive waters, however, other movies have already sailed. Of the slowly increasing number of trans and queer-focused holiday movies, some of the best include Single All the Way and Happiest Season, both of which include queer characters who get the on-screen happily ever afters that so often only straight movie characters receive. While the former positions its antagonists amongst a largely supportive community, the latter incorporates the realistic struggles of trans and queer people amongst unsupportive families – two different perspectives that are both key to the full representation of the trans and queer community but still give us the happy endings we want in these holiday films.