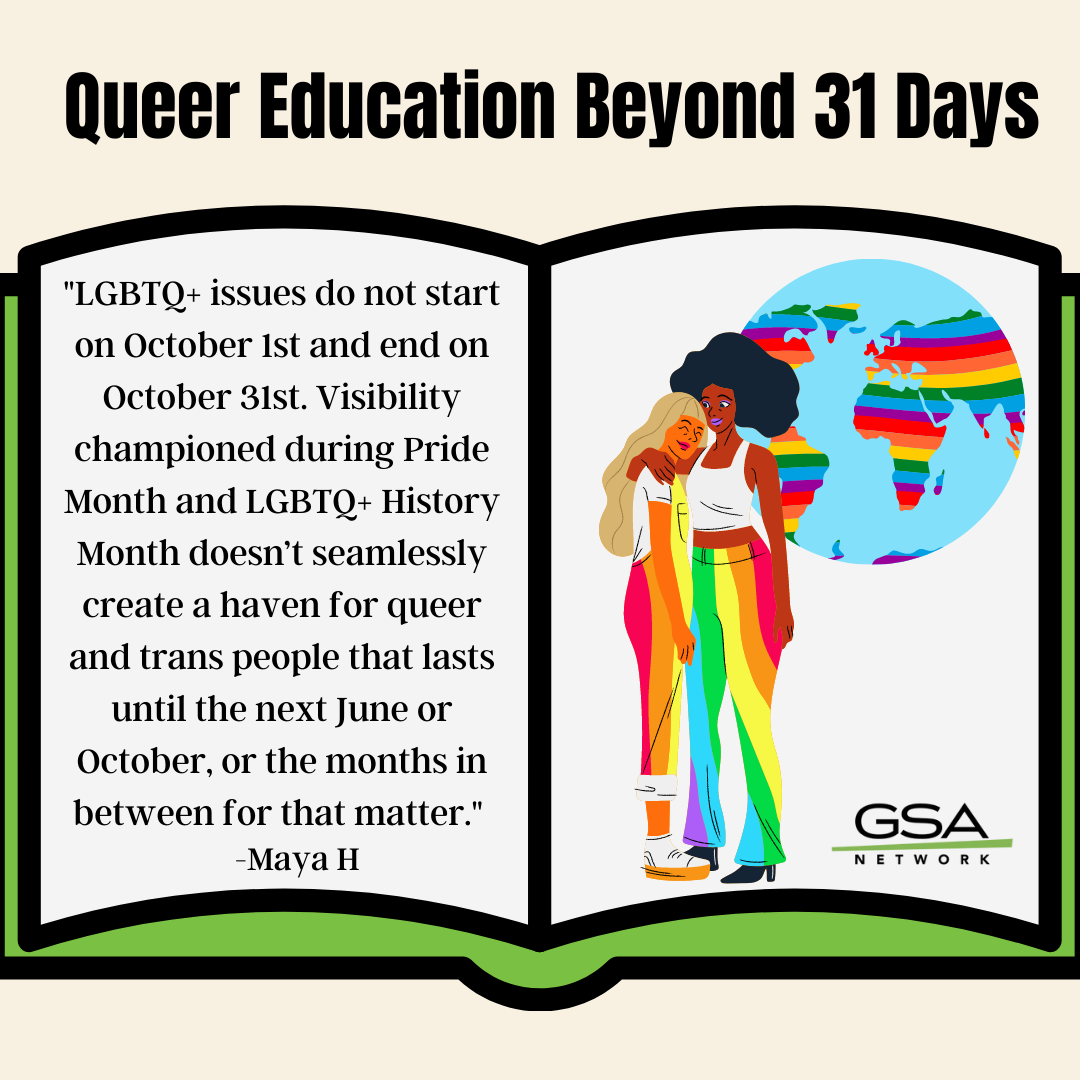 Every October, schools, companies, and communities roll out the rainbow carpet for LGBTQ+ History Month. Such visibility is essential: it raises awareness for LGBTQ+ issues, prompts people to consider queer liberation, and encourages others to donate–monetarily or otherwise–to organizations fighting for LGBTQ+ rights worldwide. Yet just like during Pride Month– though to a noticeably lesser extent– the love, remembrance, and celebration of LGBTQ+ people and history that companies and communities push during October often have a one-month expiration date; come November, interest in LGBTQ+ rights and history immediately dips, billboards are taken down, celebrations are stopped, and the conversations started in October are effectively muted.

LGBTQ+ people are queer every single day. Trans and nonbinary youth continue to consider suicide at a rate more than 160% times their cisgender counterparts. 45.5% of LGBTQ+ workers report experiencing unfair treatment at their work on behalf of their gender or sexual identity. More than 50% of LGBTQ+ Americans report covering up or denying a personal relationship to avoid discrimination or negative repercussions. LGBTQ+ issues do not start on October 1st and end on October 31st. Visibility championed during Pride Month and LGBTQ+ History Month doesn’t seamlessly create a haven for queer and trans people that lasts until the next June or October, or the months in between for that matter. We must continue to support LGBTQ+ people and raise awareness regarding LGBTQ+ history all year round. And luckily, there are many ways to do so.

Books are an invaluable tool for education, and books centered around LGBTQ+ characters not only raise education about LGBTQ+ identity, but they also support queer and trans authors. As impactful and necessary as they are, however, LGBTQ+ books top the list of those that are banned and challenged in classrooms. Banned books such as I am Jazz by Jazz Jennings and Jessica Herthel, Drama by Raina Telgemeier, and The Perks of Being a Wallflower by Stephen Chbosky are three of the most frequently challenged books, often removed from school districts’ libraries for “lewd” and “inappropriate” content. Despite being age-appropriate and pushing necessary narratives and imploring students to have healthy conversations, parents often protest for such books to be banned in order to “protect” their children from absorbing LGBTQ+ related content.

For instance, in 2017, parents at Rocklin Academy Gateway challenged I am Jazz and demanded that parents have the right to ensure their children don’t share a classroom with any transgender student after a transitioning kindergarten student brought in the picture book for read-aloud. Though the school stood behind the student, such transphobic and homophobic attacks on literature continue to happen, and thus, reading and supporting LGBTQ+ books–and also fighting against banning books–remains one of the most important ways to make LGBTQ+ History Month’s legacy last through the year.

More broadly, working to educate ourselves and our communities around LGBTQ+ matters and history is also a pillar of keeping LGBTQ+ History Month an all-year dialogue. There are dozens of mediums to be used to learn more about the LGBTQ+ community: movies centered around queer identity that are well thought out and rebel against cliched narratives, books that elicit tears, laughter, and deep conversations, influencers who use their platform to discuss their queer journeys, and artists whose work celebrates LGBTQ+ existence. There are plentiful charities to donate to if you have time or money to share, and there are also free ways to support LGBTQ+ people while being educated, such as streaming music by queer artists, supporting queer creators on social media, and supporting queer poets and writers at open mics.

Ultimately, one of the greatest barriers to true queer liberation is a lack of education and support for LGBTQ+ people. Without positive representation and education around LGBTQ+ identities and issues, prejudice can grow, resulting in a continued lack of programs and laws that support queer and trans people.

The issues LGBTQ+ people fight every day can not be solved in a single LGBTQ+ History Month; but by ensuring that our activism remains strong every single day– not just in October or June– we can slowly but surely create a more LGBTQ+ inclusive society.