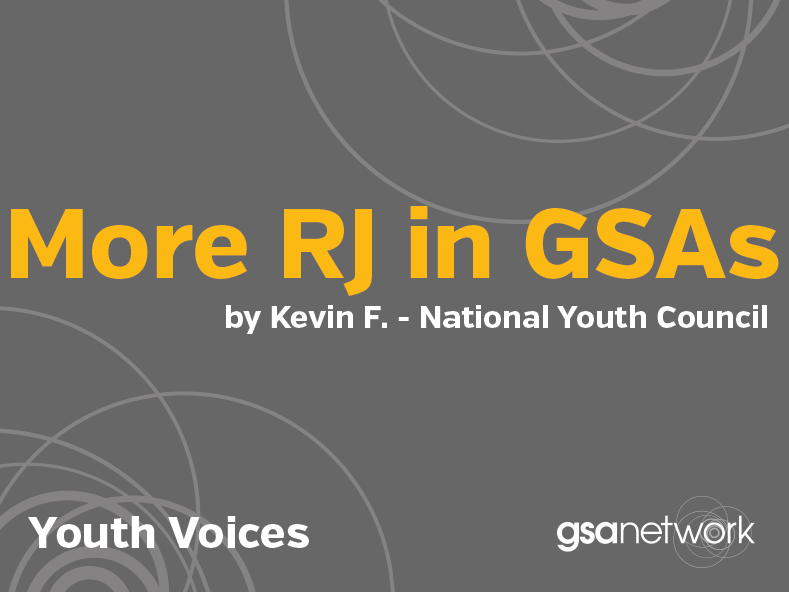 I have noticed a divide between white LGBTQ students’ concerns and the concerns of LGBTQ students of color, especially when it comes to challenging school climate. Unfortunately, oftentimes, white teachers (or in my case at my last school, a Latino counselor) tend to lead these groups. Without administrators of color in the room to make sure they’re heard, it seems like the needs of LGBTQ students of color are overshadowed or ignored. Part of the problem is that the racial makeup of teachers across the country doesn’t reflect the increasingly diverse population of students.  In my case, there was a person of color who headed up the school’s GSA for middle and high school students, but there were other white teachers supervising/observing as well. Issues relating to racial justice weren’t really supported or encouraged. Conversations around daily issues in the classroom and during school-related extracurricular activities didn’t seem inclusive of what students of color face.

One example of this racial divide became clear last year. My school’s rallies, protests, and more politically organized actions were relegated to one protest that year, concerning gun violence and school shootings. The protest was part of a city-wide student protest of mainly public school students. It is kind of interesting that in my school’s protest there seemed to be unity of purpose among the student body that went beyond black and white. However, at a later city-wide protest there was a distinctive tension between the concerns of white students and students of color. As a matter of fact, at different points, the tone was downright hostile: white students called the black students the N word and wanted them to stop taking a leadership position at the protest. They didn’t listen to black students who said gun violence isn’t just a school-based issue but an urban violence issue that impacts their neighborhoods every day.

Even though this example doesn’t directly involve the GSA or LGBTQ students, it is characteristic of the racial divide and differing experiences between white students and students of color in middle and high school. These buried tensions often come out during times of activism and protest. There seems to be two different agendas at play. Somehow, we have to unify the GSAs around all issues that affect all of the members. These communities must always include the different, yet related, concerns of people of color — particularly black and brown students. These include issues of violence — gang violence, police harassment and violence, domestic and familial violence — to name just a few. It wouldn’t be an either/or type of focus, as there are intersections where the concerns of white and POC meet. We need to find those instances and make them opportunities for joint action. I don’t think it helps to alienate or be hostile towards a group of students that don’t happen to share your culture or race. However, we do need to be actively advocating for every opportunity to put forward and represent an agenda that includes a focus on POC.

We need to be unified to wield the most power.

Today, the mission of the GSA Network is to acknowledge the intersection of race and trans and queer identities and to make sure that racial justice is a core goal of any LGBTQ advocacy work. The concerns might be very different depending on the geographical area. But, having said that, there are possibly some agenda items — like the above issues of violence — that are relevant nationwide. I think we can focus on those first in the GSAs. It’s not an entire solution, but it I think it could be a strong start.