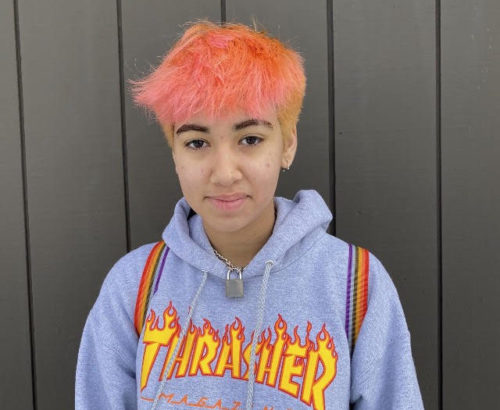 This interview is part of the #StillWeRise Series produced by the National Youth Council for GSA Day for Racial Justice (#GSADay4RJ). Click here for more interviews.

Meet Marco, interviewed by Jae from the National Youth Council

I am a ball of all the experiences life has thrown at me. I don’t think there’s a simple way to explain myself or my story, because it’s quite literally, just a speck in retrospect.

What is your first memory of activism?

My first memory of activism, as small as it may seem, was me joining in at protests, going to cool places [like the Leadership Training Institute] to know how to further my activism, being more educated and understanding human beings, and pushing people who aren’t as educated to understand why that’s such a dangerous thing.

What has pulled you towards activism?

Honestly, a key component as to why I have decided to start my mini activism is (…) because our society is built in a way that I have always felt like an outsider or like there was something wrong with me. But after careful consideration, I have found that the problem isn’t me—it’s society. And it needs to change.

What is a hard lesson you’ve learned regarding activism?

I guess one of the hardest things that I’ve had to learn is just that’s sometimes the little steps are the safest, and that [people don’t always] want to see the other side, and that’s okay.

How has the school-to-prison pipeline impacted you?

The negative reactions I’ve gotten from TEACHERS has for sure shaped the way that I look at school. If anything, because of the purposeful misgendering that some teachers have done in the past, and continue to do, I cannot be at school without being overwhelmed and distressed. All in all, my brain’s just been at a constant “school sucks,” because of how crappy the experience has been and continues to be. But I really hope that my activism helps people find a safe grey area (…) beating the system in a good and constructive way.

When I learned [about] the pipeline, I came to the realization that that’s why I’ve always felt out of place, or like I was an inconvenience to some teachers [and] “resource officers.” After I learned about the pipeline in depth, I realized that schools don’t care about me, so I decided (…) I don’t care about school. Because of the already negative memories I have with [school] I’ve just found that the pipeline indeed makes school an even worse experience for me.

How have your marginalized identities influenced your activism?

I feel like already being at a disadvantage with some of my identities has helped me gain a small [amount of] insight about what people of other marginalized groups are going through [and] therefore helps me try to help them as much as I can.

What do you wish people understood or knew more about?

I wish that, in general, everyone understood a lot of the minority groups and the struggles they go through. But not just understand—like GENUINELY understand things.

What is your advice to younger/newer activists?

I guess for the younger activists I would advise two things: Radicalism is the only way anything will get done, but also, make the most of the smaller wins. ‘Cause at the end of the day, a win is a win. While talking at MSAN (Minority Student Association),  I’ve come to the realization that I’m not the only one feeling heavily affected by this.

What is your advice to those wanting to be allies?

I feel like allies need to be more aware that no matter how hard they try to understand one’s struggles, they aren’t ever going to truly be allies because of things like bias and just the lack of experience when it comes to discrimination that marginalized groups face.

What is a leader to you?

Leaders can be many things, but I guess some of the main traits are: relatability, commitment, and the voice necessary to get things across.

What gives you hope?

I guess the only thing that really makes me hopeful for change is the fact that people have to actively choose to change. And change is a BEAUTIFUL thing. The more change our world has, the better it’ll be for future generations, which gives me hope that we won’t just go up in flames (both literally and figuratively).