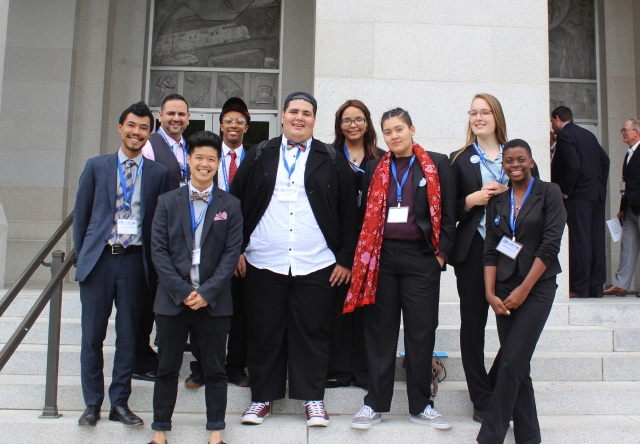 When I started my GSA club, our dreams of liberation consisted of being able to go to school free from violence, bullying or harassment, perhaps make some similar friends, and just have one safe space to grapple with our identities.  I don’t think any of us had an idea the movement would grow to be as big–or as socially impactful–as it has, or that it would unleash the power of queer and trans youth.

My GSA club had just become the 40th to join the GSA Network a year after the organization got started in 1998. As I traveled with my fellow Youth Council members from the San Francisco Bay Area down to Fresno and Los Angeles to host youth-led trainings, I met dozens of young people. Some had already started clubs and some had come to learn how to do GSA organizing for the first time.

The concept of GSAs grew really fast in the early years, and so did the network, and it wasn’t long before we started hearing that other GSA clubs around the United States were getting shut down or stopped before they could even form. These were youth outside of California that we’d never met and it started to feel like we were part of something bigger, something new that carried a lot more potential than we had originally envisioned. A movement was brewing in school houses and neighborhoods across the country as the term ‘GSA’ gained widespread recognition.

Up until that moment, there had never been an LGBTQ+ youth-led student movement–certainly not at the high school level–in which students were fighting for their right to form clubs and express themselves freely.

The realm of possibility of what liberation and justice can be for LGBTQ+ youth grew exponentially as we achieved legislative victories that protected us in schools. As mainstream acceptance for LGBTQ youth grew, shows like GLEE talked openly about anti-LGBT bullying and GSA clubs.  Young people saw the hard-fought battle for legal recognition of same-sex marriage and how it was won and became increasingly connected through social media. They now had the ability to dream bigger, bolder and brighter.

The dreams of LGBTQ+ youth today are bigger than ours could ever be because their world is bigger.  And while our dreams as LGBTQ+ youth a generation ago, may have been expansive at the time as we sought to transform public schools, our vision for liberation was also limited by the walls of the “safe spaces” we were granted. The trans and queer youth leaders of today dream of more, demand more and have visions of liberation that stretch all the way across the horizon.