Skip to main content
Search
Posted by Staff on September 4, 2017 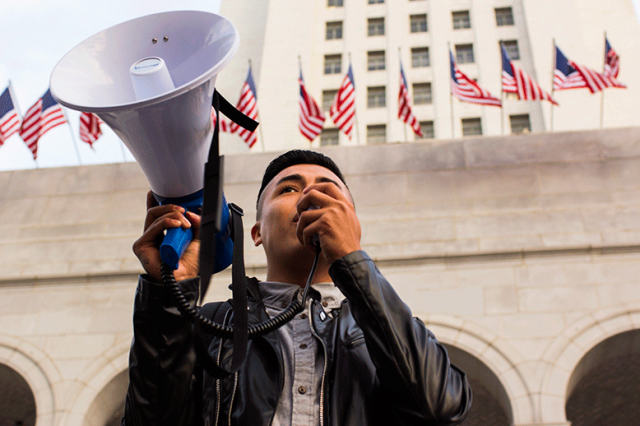 The White House has once again shown that it will continue to attack young people of color–this time, Dreamers who benefit from Deferred Action for Childhood Arrivals (DACA)–just to score political points with white supremacist, nationalist, and conservative groups.

Dreamers and UndocuQueer young people are an unstoppable force within the trans and queer movement. They boldly lead GSA clubs every day in some of the most marginalized schools and communities across the United States and they courageously fight for their right to access education without fear.  While some currently benefit from DACA, many more fearlessly protest alongside trans and queer communities to fight against the same systems of patriarchy and white supremacy that try to bring us down.

The action taken by the Trump administration not only threatens the future of high school students, college students, and young professionals; it threatens their lives as anti-immigrant groups have become emboldened in a political environment that has given white supremacists a new platform, and as local and federal enforcement agencies are not held accountable for their assaults on the rights of communities of color, particularly trans women of color. And it endangers all social justice movements that work together to dismantle systems of oppression.

We vehemently condemn any actions taken by the government that seek to criminalize young people of color and utilize educational institutions as mechanisms to locate, detain, and deport them.

We condemn actions that are designed to deprive communities of color of equal access to education and make it difficult to enjoy schools that are free from fear, discrimination, and policing.

And we denounce all government actions that further contribute to the school-to-prison and deportation pipeline just to win the favor of white supremacist and nationalist groups that deny the vital role that immigrant communities play in our everyday lives.

You Still Have Rights under DACA

DACA recipients continue to have rights and we are committed to ensuring that Dreamers have access to legal protections afforded to them under the current program. Read more about how you can protect yourself during this time with the Immigrant Legal Resource Center’s fact sheet, What Do I Need to Know if the DACA Program Ends, and join a community of Dreamers by learning about local actions taking place around the country.