QYLTS (Queer Youth Leading the South) Action Camp is the only gathering of its kind in the region, an intense, interactive summer camp designed for queer and trans youth and allies living in the South. QYLTS Action Camp is hosted in partnership with organizers from Alabama, Arkansas, Florida, Georgia, Louisiana, Mississippi and Tennessee.

The Southeastern Cohort of GSA Networks came together in 2012 to plan the first Southeastern LGBTQ Activist Camp. The camp was a collaboration to meet the needs of the five original sponsor states: Arkansas, Tennessee, Georgia, Alabama and Mississippi. The founding members were all a part of the National Association of GSA Networks, a program of GSA Network which is based in California. Since that time the cohort has expanded in the region, including working with established and new organizations in Louisiana and Florida.

WHO IS THE SOUTHEASTERN COHORT?

WHAT WE LEARN AT CAMP?

At QYLTS Camp, young organizers learn skills to help them fight against the multiple systems of oppression impacting their schools and communities. White supremacy, capitalism, and patriarchy are the focus of our discussions. Campers learn how to combat these by building skills around facilitation, importance of autonomous space, and collaborative power-building.

At the end of camp, young folks are prepared to go back to their home communities and schools and start implementing change in the form of campaigns, awareness raising, and actions. They are supported by local, regional, and national staff as well as a network of former campers. The current camp is led by a planning committee made up of representatives from Alabama, Arkansas, Florida, Georgia, Louisville, New Orleans, and North Carolina.

Dismantling White Supremacy starts within our communities and selves. Campers learn how to do anti-racist work to build stronger movements, address race and racial assumptions we encounter and discuss ways to further have open conversations outside of our camps and convenings.

Caucuses are one of the most important elements of this section of our camp. Caucuses help to build trust and supportive relationships in which campers can explore and work toward understanding internalized racism and internalized white supremacy.

Finally, camp offers participants an opportunity to learn about the city and state in which Camp is hosted. In Little Rock campers visited Central High School; Jackson offered a city tour provided by the William Winter Institute for Racial Justice; Georgia included a guided tour of the Martin Luther King, Jr National Historic neighborhood, church and museum; and Birmingham included a tour of The Birmingham Civil Rights Institute.

Dismantling patriarchy in our communities is vital to queer liberation work. Campers learn to address issues related to sex, gender identity and expression, and orientation. Being able to identify patriarchy and it’s offshoots: sexism, heterosexism, cisgenderism, and the Gender Binary System.

Campers will learn about tools and techniques to be allies against patriarchy as well as discuss current issues affecting our communities.

As a suggestion from our first year, camp has included a trans-specific training as part of our gender justice curriculum led entirely by trans and gender non-conforming young people.

The anti-capitalism portion of our camp is often the most immersive experience for campers. They get a hands-on experience based activity to think through the ways that capitalism impacts our communities and greater systems that young folks interact with on a regular basis, including: school, incarceration, and employment.

Campers will see the ways, and learn techniques to take home to share with their communities, how capitalism erases parts of our community and therefore erases all of queer and trans community.

As the final portion of our camp, economic justice strongly incorporates themes learned throughout the camp. It’s an opportunity for campers to see how all three over-arching systems interact and continue to work against our communities. Addressing just one of these areas or subset of these areas does not support our communities or the future of our work. 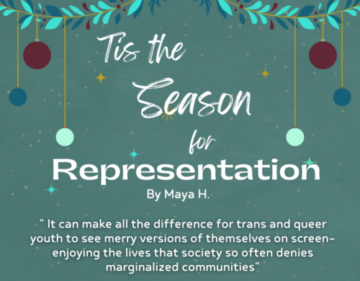 Tis the Season for Representation

By Maya H. For many, December isn’t just associated with snowmen or the brainstorming of new year’s resolutions. It’s also the time of the year Read More

The Fight for Gender Justice is Far From Over

By Maya H. Since the first calls for gender equality, gender-based activism has had heavy opposition. 19th-century suffragists were ridiculed for being “greedy,” 1960s workers’ Read More