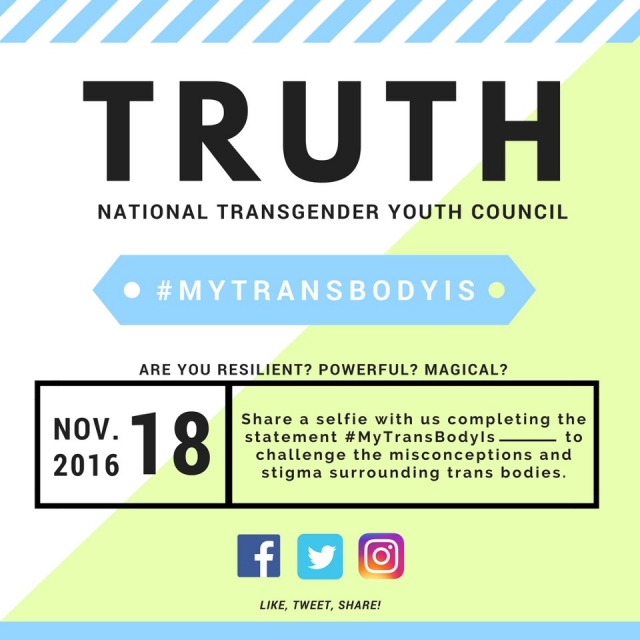 “Do you hate your body?” and other things adults asked me a lot when I was seventeen

I grew into the fullness of my gender in central Alabama as a young, weird femme. Weird as in pop punk messy, as in giant scarves-as-hairbows and tattered hightops, as in lipstick and eyeliner that competed over which was the most smudged. Understanding self-love through fashion and understanding my queerness began in tandem.
When I came out as trans just before my seventeenth birthday (nearly five years after coming out as bisexual,) I saw my identities as young and femme and queer and Southern fit seamlessly into the identity of “transgender.” My non-binary trans body felt beautiful and changing and loved.

For many gay non-transgender adults in my Birmingham organizing community, “femme,” “trans” and “assigned female at birth” were categories that couldn’t overlap. I graduated high school with burn-out deep in my bones, exhausted from simultaneously being the Transgender Youth™ for every panel/committee/training and being invalidated in my transness. Even though I had the agency and power to be the one leading many of these trainings, the general lack of support from adult organizers and the fixation of audiences on my body brought on a surge of complicated emotions I am still unpacking.

I hadn’t realized I was supposed to hate my body. In needing transgender people to conform to a certain set of experiences and desires, my plans to start hormones, bind, wear makeup, use public restrooms, and even to fall in love (“what would date you” is a real question I got asked during a panel where several adults also tried to guess what body parts I had under my sweater) were all questioned intensely.

At twenty, I now have a framework to understand the larger systems that play into which bodies are seen as public property, as for consumption. Every trans person I know has been asked these questions, has been forced to defend their trans body as valid and real. The cis investigators of our humanity range from our family and friends to medical providers, judges, and every institution that is given more agency over our trans truths than we are. My whiteness, my thinness, and the masculinity I have shifted to over time protect me from violence and harassment in a way that my trans femme siblings and sisters of color are not. Over and over again, trans bodies are seen as threats.

I learned to love my trans body as a young trans person in Alabama, a state that is about to move ahead with one of the most regressive bathroom bills in the country. I am learning to love my trans body on the eve of an election that pushed multiple trans youth to end their own lives and that has enormous consequences for trans people, particularly the overlapping groups of undocumented and working-class trans folk, trans femmes, and trans people of color.

So, more than ever, I want trans youth to have the space to rewrite narratives about our bodies. We’re not alone. We are not broken, and we can build power together through sharing our authentic stories. #MyTransBodyIs mine. Our trans bodies are everything.