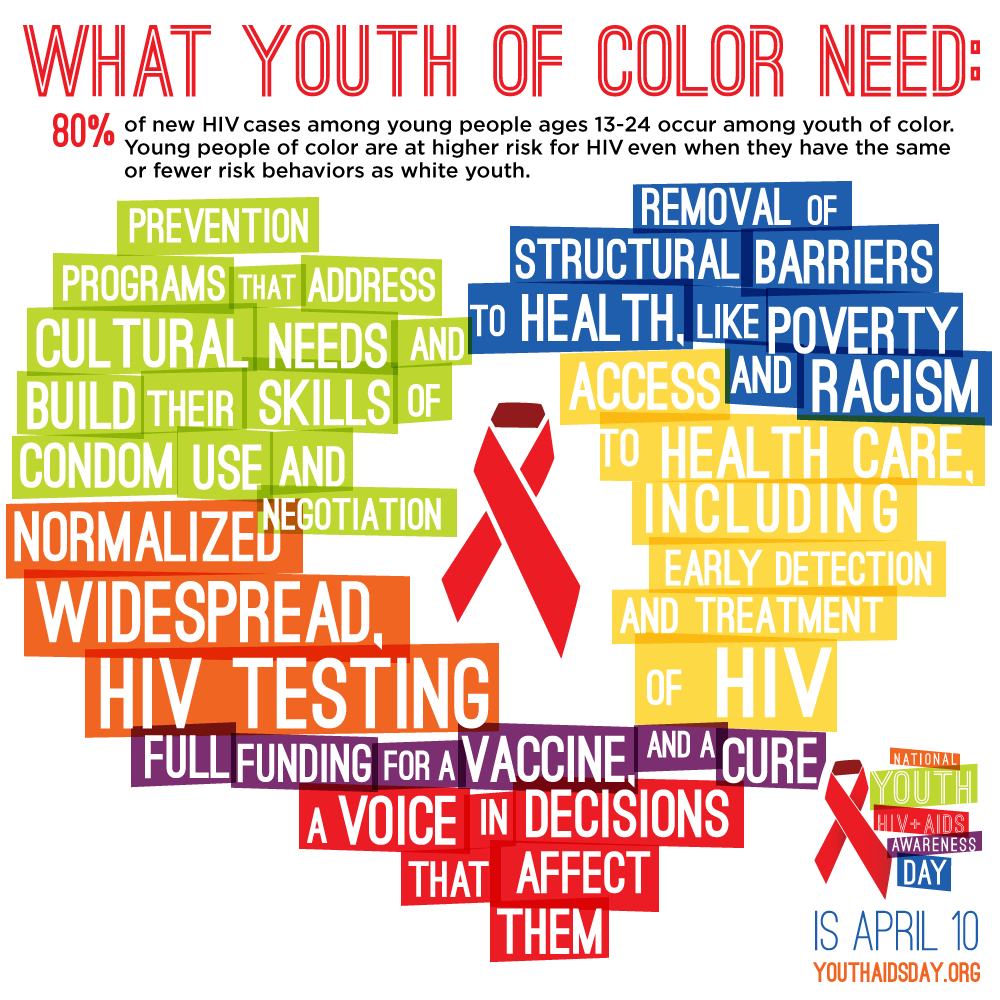 Today, on National Youth HIV/AIDS Awareness Day, two GSA Network staff members share their coming of age stories and perspectives about growing up in two very different generations–Millennial and Generation X–and different eras of the AIDS epidemic. And get tips to fight HIV in your communities.

Christopher White, PhD, is a 45 year old, white, gay man and is the Director of GSA Network’s Safe and Supportive School Project (SSSP). Tomas Rodriguez is a 25 year old, queer, latinx cisman and is the Project Coordinator of SSSP. Below are excerpts of their coming of age stories. You can read their full stories here.

When did you first hear the word HIV/AIDS? And what did it mean to you?

Tomas: HIV/AIDS wasn’t a topic of conversation for a closeted person like myself in the mid-2000’s. The first time I heard about it was in my semester-long sex education class. I honestly didn’t think anything of it; it was just another disease I wouldn’t get because I knew better.

Chris: I remember the first time that I heard about the “mysterious cancer” killing gay men in NYC, LA, and San Francisco. I must have been around 11 or 12, and while I didn’t fully understand what it meant, I knew that it was about me.

What did you know about sexual health when you first started dating?

Tomas: I wasn’t sexually active until my early 20s when I met my first partner. It was instant chemistry, I remember myself never asking any of the questions you’re suppose to ask before sex. I didn’t ask if we should use a condom or if he had been tested recently. Why would he put me at risk? We dated for a couple of months, but I eventually moved to San Francisco for college and didn’t think anything of it. I got a message a few months later that I should get tested.

Chris: I dated my first boyfriend when I was sixteen. We started having sex on his sixteenth birthday; I was seventeen. Neither of us had ever had sex with anyone before, but we used condoms because when we were growing up, we were told that gay sex equaled death. I think a lot about how messed up it was to come of age during a time when having sex the way that I wanted to have sex meant a high possibility of catching a virus that would kill me. What does that do to your psyche? What does it do to the ways that you think about sex and pleasure?

How did you feel the first time you got tested for HIV/AIDS?

Tomas: There I was on a foggy San Francisco afternoon at a free clinic. I didn’t know what STI/STD my former partner had so I didn’t know what to test for. I was incredibly unhelpful to the receptionist who was guiding me through the paperwork; their demeanor shifted from friendly to disappointed. A few nervous laughs after each test they said I could expect a phone call if they needed to follow up. Translation: if you test positive for something, we’ll contact you. I remember walking out of the office feeling cruddy. There was no follow up so I felt a sense of relief, but I didn’t feel good. I wondered if this is what other people my age went through – that it takes a scare for us to take our health seriously.

Chris:  In college, I remember going to get tested for HIV at the student health center at my university every few months. I would go with friends and we’d laugh at the pseudonyms we’d create to give to the nurses for our anonymous HIV antibody tests. I regularly used Kylie Green Jeans (Kylie, duh. Green Jeans because of Captain Kangaroo, silly and childish but so comforting to be a child again). You then had to wait two weeks to get your results and were told to spend time thinking about what we were going to do if the test results came back positive. Twenty years old and you have to imagine what it would be like to be told that you have 5-10 years to live.

Read their full story here and read below to get tips to fight HIV in your communities.

Moving towards an AIDS free generation

Young people are currently facing rising rates of HIV infection, particularly young Black and Latinx gay and bisexual men. At the same time, we are living in a time when the idea of an “AIDS free” generation is no longer just a fantasy.

Using condoms and getting tested are still critical in avoiding infection and infecting others. But they haven’t been enough to end a preventable epidemic. However, for the first time, we have the science and medicine to potentially reach a new infection rate of zero in our lifetimes!

Pre-Exposure Prophylaxis (PrEP), Post-Exposure Prophylaxis (PEP), and ensuring everyone who is HIV+ is on treatment along with continued condom use are key. PrEP is an anti-retroviral medication taken by HIV negative individuals that has been shown highly effective in preventing infection, while PEP is a short-term treatment regimen taken by people who know they have been exposed to the virus through sexual behaviors, accidental needle sticks, etc. And research has shown that HIV+ people who are on treatment with an undetectable viral load cannot infect others. In combination, the use of these medications has the potential to ending this epidemic.

Below are some tips for fighting HIV in your communities!

Break the Stigma of HIV

Educate yourself on how HIV is transmitted and understand your own biases of HIV/AIDS
Learn about HIV positive activists like Cecilia Chung, Peter Staley, & Vito Russo
Educate others in your schools and communities through HIV Awareness days
Prevention is Key

Having an STD increases your risk of HIV. Locate a free testing clinic in your zip code here.
Inquire to see if your school district has a condom availability program.
Talk to your healthcare provider about PrEP, one of many tools in our prevention tool belt.
Treatment as Prevention

People with HIV live healthy lives through treatment. Locate HIV services near you.

Defending Our Identity
A Tale of Two Generations