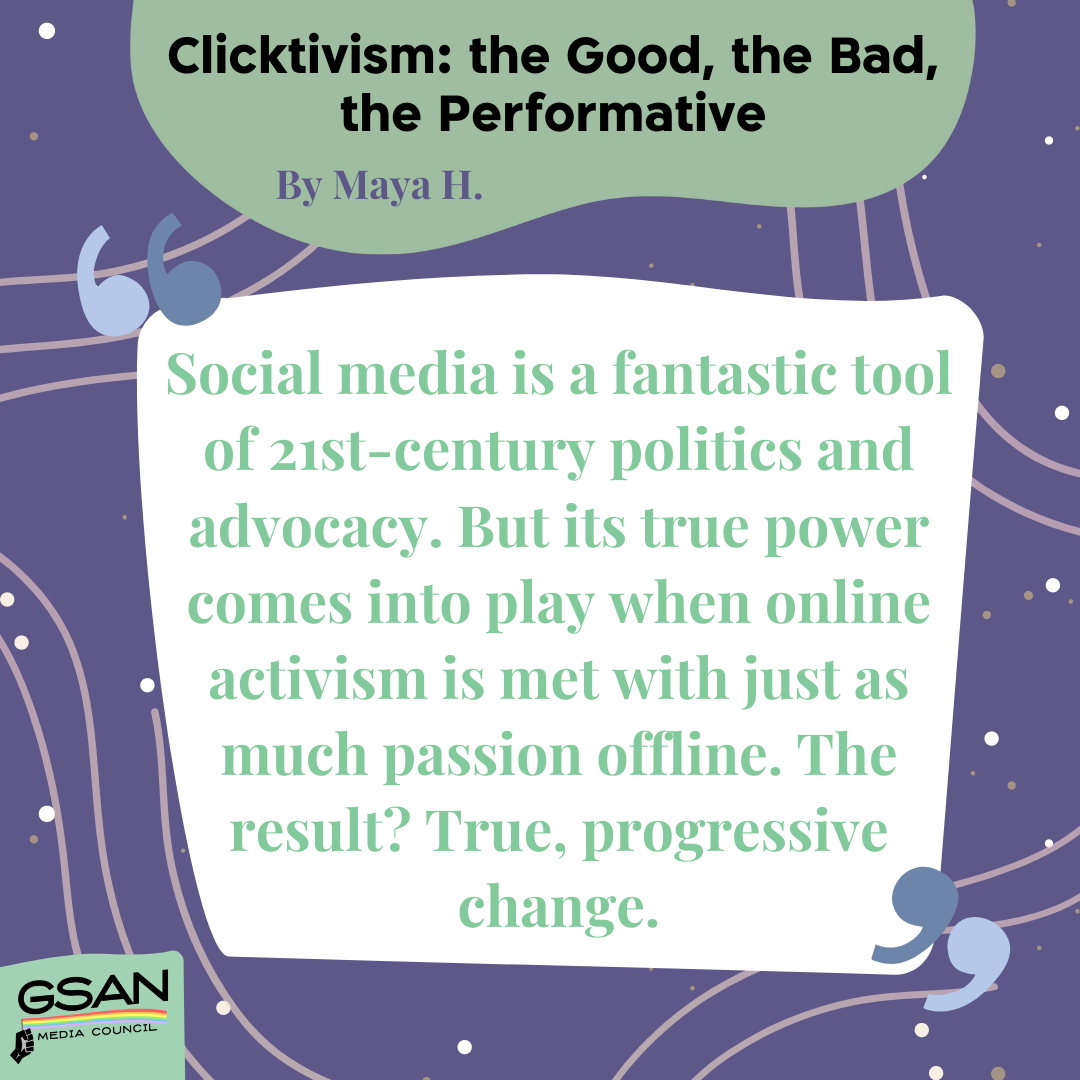 Throughout history, there have been innovations and landmark protests that have changed the face of activism forever: the Stonewall riots, car caravans used as blockades, the recording option on cell phones-, to name a few. Now, in the 21st century, advocates have been granted a new tool that is rapidly transforming political organizing as we know it: social media. Through infographics, bitesize news, and fundraising initiatives, advocacy has largely moved from in-person to on the web. But, such a significant shift is not without a plethora of issues.

When we equate reposting a Canva infographic with protesting, the value of both demonstrations is diminished. Pressing three buttons absentmindedly while waiting in line for a cup of coffee is incomparable to canvassing for a politician. ‘Liking’ an aesthetic post that boils centuries of homophobia down to five slides of bullet points is nowhere in the same realm of impact as speaking at a town hall. This is not to say that advancing causes via social media is ineffective; it certainly has its power and influence. However, when partaking in social media activism, cleverly coined “clicktivism,” it is imperative to remain aware of the potentially lessened magnitude of such actions.

The internet is a comparatively unregulated place, an aspect that has drawn both praise and criticism. While such freedom to post as one pleases can be used for good, such as posting videos holding police and politicians accountable for abuse and hypocrisy, it also serves as a gateway for misinformation. While widely circulated posts on Instagram- a free platform- can make current events and politics more accessible to the general public than perhaps the Washington Post- a news site with limits on free articles- it’s important to still take anything digested from social media with a grain of salt. Rarely can eight slides cover the news to the same degree that a well-financed and written 750-word article can. Just the same, mainstream media hosts its own issues: paywalls, complex diction, biases, and elitism all run rampant.

There also lies the issue of desensitizing violence. Videos of police brutality and hate crimes are an imperative part of the justice system in the 21st century. Such videos serve as irrefutable evidence of an occurrence. But the constant circulation of such videos without content warnings is more traumatic than it is helpful. When we see bloody attacks on queer teenagers sandwiched between photos of aesthetic meals and reposts of giveaways, that violence becomes less and less alarming to us as we become numb to the constant barrage of trauma. We begin to be less and less bothered by such violence because we see it so frequently and so casually. Blood baths diminish in weight, and photographic evidence of humanity at its most vile state turns more and more into something to casually tap through on lunch break.

Perhaps most importantly, we can work to merge activism online and offline to more powerfully fuel movements.  We can continue to use social media to organize and spread the word of protests and donation drives, events that people can then off-line attend if able to. The Black Lives Matter movement offers an example of how both offline and online activism is necessary to cultivate real change. Online, passion about the cause continues to grow, posts regarding protests circulate, and information about chapter meetings and community events in support of BLM are frequently shared. Such advocacy is carried off the internet, too, in the form of activists showing up to protests, demanding police accountability and defunding at open mics and town halls, and the founding and attendance of Black Lives Matter chapters at various schools.

Social media is a fantastic tool of 21st-century politics and advocacy. But its true power comes into play when online activism is met with just as much passion offline. The result? True, progressive change.