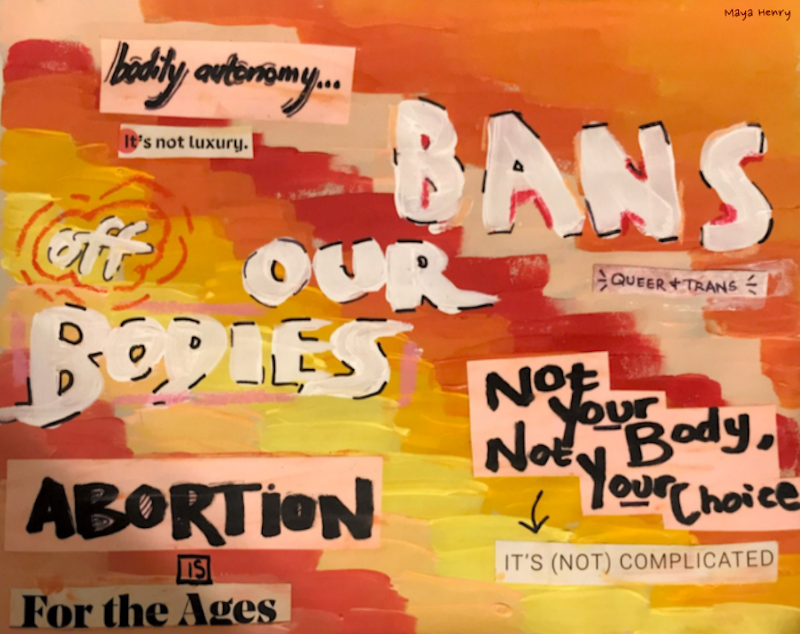 Once upon a time, from the first undetermined and unrecorded practices of abortion to the late 1880s, abortion wasn’t a hot topic issue in the United States. In fact, abortion was treated as a standard medical procedure, with only religious extremist groups publicly challenging laws that allowed abortion until “quickening,” the time at which a pregnant person first feels the fetus move. That is, until the late 1860s, when the Catholic Church condemned abortion, sending the once non-contentious issue of abortion into the limelight politically and socially. Starting in 1869, when abortion became a political battleground in the United States especially, a once standard medical procedure has become one of the most polarized playgrounds for debate and policy in national history. No longer discussed sans-stigma, limiting abortion and shaming those who had abortions were used as methods to control and punish people–specifically women. The idea that anybody, especially a woman, a person meant to spend her life as a mother and little else, would ever not want to be pregnant was used to villainize not only those who had abortions but all those who supported a person’s right to their own body.

Though abortion has long been a pillar of history, it was only legalized on a federal level in 1973 in the infamous landmark Supreme Court ruling of Roe v Wade. This historic ruling, however, suffered a shocking blow when, just earlier this May, Politico leaked a Supreme Court draft that revealed the high court had voted to strike down the precedent earlier this year. If finalized, abortion laws would be turned over to individual states, who would be able to fully ban abortion for any reason and at all stages of pregnancy.

The Supreme Court leak is in no way the first threat to abortion rights that states have seen since 1973. In 2022, more than 546 individual restrictions on abortion, ranging in severity and success, have been introduced across 42 states. Of those, 37 were made law that, as of publication, still stand, and have withheld legal challenging at the county, state, and even federal levels. The leak comes at a time, however, when sex education in high schools is at an all-time low. As of the leak date, only 38 states have laws about sex education, 30 of which mandate that abstinence until marriage is promoted as the best “solution” to the country’s raging issue with teenage pregnancy and STIs. That leaves a total of eight states out of 50 that mandate teachers discuss comprehensive and consent-inclusionary sex education with students.

Sex education isn’t just about sex and pregnancy: it’s a safe space to learn about bodily autonomy, healthy and abusive relationship dynamics, set boundaries, and be as prepared and safe as possible. And so, inclusive and mandated sex education minimizes abortion by giving people the tools to avoid unwanted pregnancy pre-conception in a way that banning abortion doesn’t. Yet, not a single state that would ban abortion completely should Roe v Wade be overturned requires comprehensive sex ed to be taught to students regarding protection, consent, and family planning. In such states, people are set up to fail: education of their bodies is denied to them, and in turn, the choice to do what they see fit for their bodies is retracted, too.

For one, pregnancy and its termination don’t just affect women, but rather, people of all genders who are able to become pregnant. While pregnancy can detriment the mental, physical, and emotional health of all people, it has especially significant effects on non-binary and trans people who may become pregnant and not want to carry their pregnancy to term. Pregnancy–a highly gendered experience–and the role as a birth giver–a thoroughly gendered role–often further exasperates gender and body dysmorphia in non-cisgender pregnant people, pauses gender-affirming hormones and surgeries, and strains relationships where gender and sexuality are contentious factors.

Further, abortion rights are a general landmark for other types of human rights, many affecting trans and queer people in other ways. If Roe v Wade, a landmark case that set the precedent for dozens of other contentious laws, is repealed, what’s to say that other laws maintaining a person’s right to privacy and bodily autonomy won’t follow suit? Roe v Wade has been upheld largely because of its interpretation of the 14th amendment–the same amendment used in the historic cases of Obergefell v Hodges (marriage equality), Brown v Board of Education (racial discrimination in education), and Reed v Reed (gender discrimination). So, if Roe v Wade is overturned as the draft leak indicates it very well may be, the security of other landmark cases central to gender and racial justice may just as easily be retracted and left up to states to deduce.

If abortion rights and marriage equality, among many other civil rights, are left up to states, communities won’t be affected fairly. If Roe v Wade is overturned, 26 states are certain or likely to immediately ban abortion–but that won’t stop legal abortions from happening for all of the states’ citizens. Affluent, well-connected people will always be able to access abortions out-of-state, a luxury that the non-wealthy won’t have. And so, while some will still be able to access safe, legal abortions–even if they must travel to a different state to receive such care–the vast majority of those seeking an abortion in anti-abortion states will be left to either carry the pregnancy to term and deal with the social, physical, and economic ramifications, or will be subjected to illegal abortions. On an international scale, half of all abortions are done illegally, often with such poor safety procedures that approximately 68,000 people die annually from illegal abortions. For the US to avoid an increase in the public health crisis of death by illegal abortion, abortion must stay legal, sterile, and safe for everyone, regardless of state or wealth.

The fight over abortion ultimately boils down to a fight over who deserves bodily autonomy. Trans and queer communities have long been denied rights to their own bodies and privacy, be it through restrictions on clothing and gender expression or laws banning same-sex intimacy. What trans and queer people have wanted to do with their bodies has been put on the back burner to what politicians want them to do for centuries. In a country where you must give permission prior to your death for your organs to be donated post-humously, pregnant peoples’ decisions in regards to their own pregnancy have become a discussion that often excludes the pregnant person whose body and life any decision will end up influencing.

Be it implicitly or explicitly, banning abortion hurts not just pregnant people, but also all of the trans and queer community. When one person’s right to govern what happens to their own body is robbed from them, everybody’s bodily autonomy is put in danger. And so, attacks on abortion aren’t just attacks on pregnant people: they are an attack on self-expression, identity, and queerness as a whole.

To take action in the fight against restrictive and dangerous abortion bans, consider contacting your elected representatives, sharing your call to action, and volunteering with abortion-aid services. Coupling the fight for abortion rights with the fight for inclusive sex education, there are numerous ways to educate yourself and others on sex education and work to make your school an inclusive sex education practitioner.  Our right to choose what happens to our bodies is not up for debate, and try as politicians might, our rights will never be stripped without valiant resistance.